are you already looking forward to to tonight? Or dreading it?

I admit, I am a secret fan. Officially of course, I celebrate it only for the children's sake, especially since it is not traditionally celebrated in Germany, where I live.
However, the spooky decorations are right up my sleeve.

The past years, we have always made a party with friends, but last year we were already preparing for our move in December, so we had to skip that year. My girls were very reasonable about it, but I had to promise them, we would have a party again this year.

However, the younger of my girls enjoyed last years alternative plan (trick or treating with their little cousin) so much, she wanted to do that again this year, while my older one insisted on the promised party.
They both insisted on their point of view, not even an attempt at a compromise.

In the end, we decided to cut back on the creepy decorations and make a party with the little ones (two cousins and a half brother). Since they are still very young, they will not stay late and we will still have time to watch a film together.

That finally decided with little more than a week to go, I had to create some last minute invitations, to make it a proper party.

I coloured both images with ZIG markers, sticking to a Halloween colour scheme. For the unicorn, I created the glow with yellow ink blending, but I was not entirely happy with the result, so I tried yellow water colour on the second image. 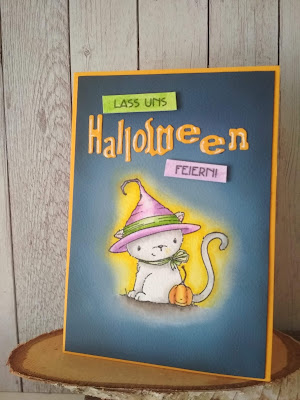 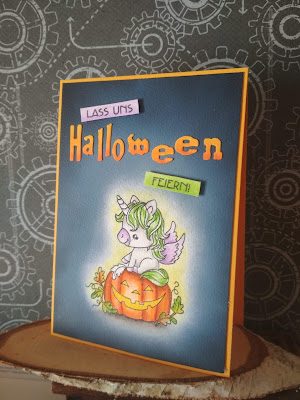 Did you notice I missed a leaf on the pumpkin? I didn't my daughter pointed it out to me, so I fixed that later. I also added some silver accents on the horn with a gel pen. 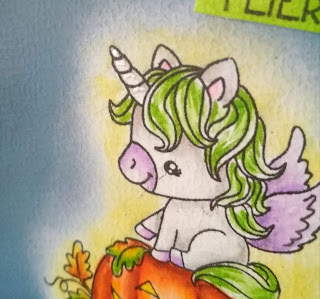 For a dramatic vignette, I added Distress Oxides around the whole panel, darkening the very edges with black.

Then I die cut the letters and stamped the sentiment, which reads "Let's celebrate Halloween".

The effect is not entirely how I imagined, but I am still okay with it.


Have a lovely day
Ela