Hello Crafters,
I hope you are all still staying safe.
2 days ago, one of our family youngsters turned 4 and we gave him the board game 'Nuss voraus', which roughly translates to 'nut ahead'. I couldn't find it in English, so I am not sure if it's actually called that.
It is about a squirrel, so I absolutely wanted to use my only squirrel stamp, which I've never used before. Besides, I wanted to use the number '4' as a design element and I also had the vague idea, that a shaker card would be fun.
With these two and a half elements as a starting point, I water coloured the squirrel with my ZIG markers and fuzzy cut him out.
After that, I struggled a bit. First I thought I'd use a row of numbers, like I did for my niece's birthday last year and place the squirrel on top of the line. But somehow that didn't appeal to me as much for this card. So I went ahead and cut out a bunch of numbers to cover the whole background. I think of this as faux dry embossing, since it adds white on white texture without being in-your-face. 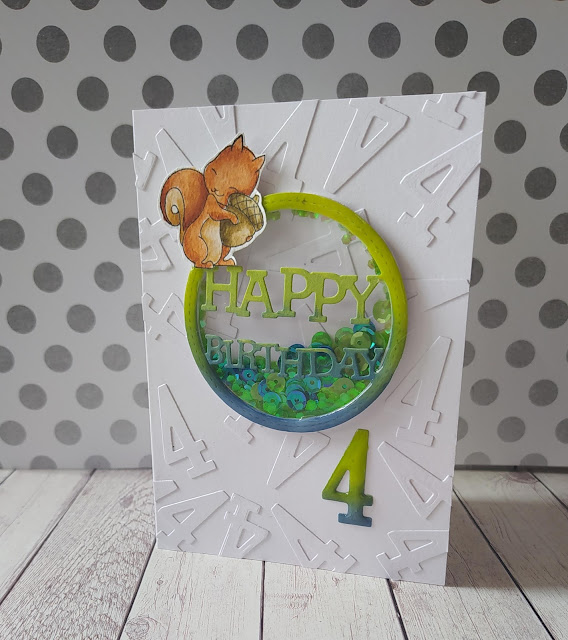 I liked that, but now my squirrel had nothing to stand and there was space to fill therefore I decided to go with the shaker circle die, with bright green and blue sequins inside.
I wanted one of the numbers to stand out from the rest, so I blended some blue and green Oxide ink on one of them and on the circle die as well. I thought these colours would compliment my squirrel's c. 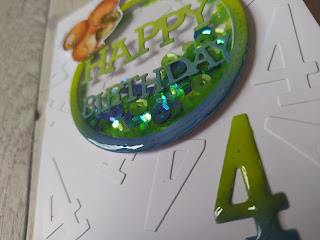 When I had adhered it all down, I felt the colours were too muted, I wanted them glossy and bright, so I added liberal amounts of glossy accents to the 4 and the circle, but not the Happy Birthday. I didn't trust myself with the intricate letters.

A bit of a stupid idea, since we were due to visit only a few hours later, so I had to place the finished card over the heating to make it dry faster. It turned out okay, luckily.

In the end, I am not sure if the squirrel really fits in with the rest of the design, but I used him anyway since that was the whole point of it. I grounded him on the letter H.

Since my great-nephew will also be 4 next month, we'll give him the same game, and I'll have another chance to make a card with this squirrel. I am thinking fall coloured tiny leaves in a square shaker, maybe...

Sadly, 4-year-olds don't really appreciate Birthday cards, but at least the parents do. Cardmaker's children are probably the exception, my girls always appreciated handmade cards, because they knew how much love went into them. I bet it is/was the same for your children if you're a cardmaker.

That's it for today, stay safe wherever you are