The great book of elves

Time to show you something else that kept me busy during the past weeks.
After seeing my Halloween grimoires, my friend, who is a teacher, asked me to help her create a magic fairy book, as a prop for a school musical. So I spent quite a few busy evenings, collecting ideas and developing a plan. And then many more actually creating it.

And here it is, the great book of elves: 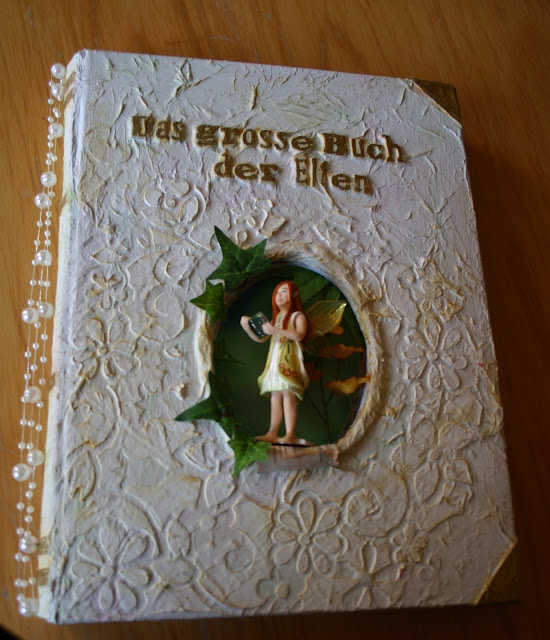 As a basis I got an old used book, the largest I could find. Then I cut the oval in the front and about a third of the pages, to create the recess for my little fairy. If you ever try to re-create something similar, I can only advise you to use straight lines, the oval was so tough and it didn’t get as even as I had hoped…
After the cutting was finished, I covered the book with mod podge and a single layer of crumpled paper towel, to create some structure. Then I added some more structure with embossing paste and a floral stencil. I had to do that twice, the first layer wasn’t quite enough. I also adhered the die cut fun foam letters to the book. 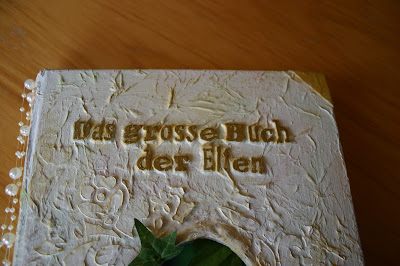 Then I painted it all white (several layers) and brushed on green and pink, because that was the colour scheme my friend wanted. But that really didn’t look good at all, so I painted it white again. After this layer of white, the green and pink still shone through a little, but I thought that looked rather interesting, almost pearlescent. So I kept it like that and brushed on gold to bring out the structure. But that wasn't quite strong enough for the letters. Therefore I used a gold Edding to trace the letters, corners and stripes. That made them stand out much better.

I placed a green water colour background behind the window and glued the pages of the window together (mod podge again). Then I adhered some leaves, flowers, a small piece of bark and the fairy in the opening. 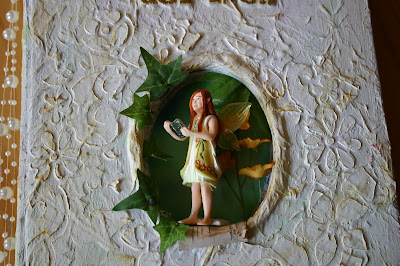 I also added three strings of pearls to the outside spine, to make it more magical. To do so, I fixed the strings to an elastic band with wire, pulled the elastic through the spine and then fixed the other side in the same way, under a bit of tension. Now the elastic is pulling in the string and wire, keeping them safely hidden. 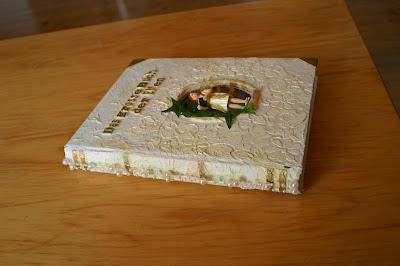 After the outside was completed, I turned to the inside. As the base was a glossy paged cookery book, I really wanted to cover the pages with something.
So for a start I removed quite a few pages, to make the book less heavy, thinking of the poor child who will have to hold it up on stage. Then I chose aged looking printer paper and printed a few fairy stories on it in a font I liked, but very lightly so the print was barely visible. Then I traced all the letters with a black calligraphy fountain pen, to make it look handwritten. Next time I’d definitely just print it in black and be done with it. I don't even want to know how many hours that cost me.

Next step was to cut off all the remaining pages, leaving only a narrow strip of each, on which I adhered the new pages, covering the strip from both sides. That was much more difficult than I thought, which is why the pages don’t look as neatly as I had hoped. But after all the work I just can’t start over… So that’s deliberate, definitely…. ;) 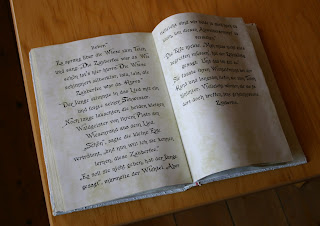 By now, my friend already took the book back to school to show her class, and they were all excited...