maybe you still remember, that I promised to show my Harry Potter Halloween party decorations, as soon as my friend would send me the pictures she took. Well, I still don't have them, she's always very busy, so I decided to go ahead with the ones I took. I did not take pictures of everything, because I had planned to take them when it was all finished, but food preparations took so much longer, that the "all finished status" was reached about one hour into the party... So no time to take pictures.

But I checked my mobile and my camera for what I had and here it is.... Sorry that some of the photos are of rather bad quality, they were never meant to go online.

First things first: the invitation card and envelope. I embossed a grey panel with a spider's web embossing folder went over the raised parts and edges with white pigment ink. Then I matted it with a lilac panel and adhered it to an orange card base. Next, I created the sentiment strip, which I adhered with foam tape.
By the way, I didn't have lilac cards stock, so I used white and coloured it with an alcohol marker.

The spider is a cheap plastic Halloween prop, adhered with hot glue. It's rather bulky, but none of the cards went in the mail, so who cares.

For the envelopes I just doodled a spider on a string and a few webs. The cards were all the same, but each of the envelopes was a little different. 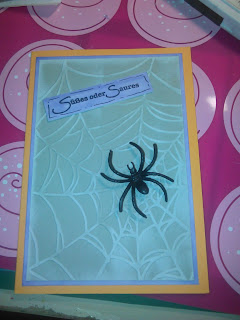 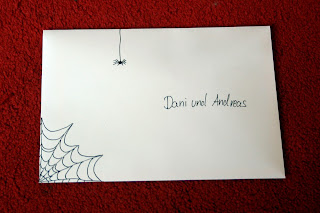 Normally, our house is not open to the street, the entrance is behind a high gate, so no one can look into the garden. But for the occasion we opened the gate and decorated the cobbled front area near the entrance. There is a second, very old gate a few meters further back, which we closed instead, so the garden was still closed off.

We carved a pumpkin, set up three store bought gravestones and lighted a few red grave yard candles around them. Although that doesn't sound all that special, it looked pretty cool. 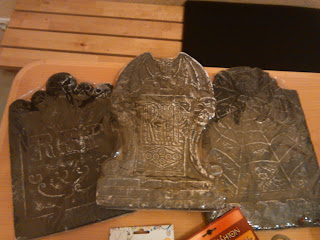 Inside we decorated quite a bit more. Most of the things are handmade, or altered somehow and most ideas are from the internet.

First off, a flock of hand cut cardstock bats. They cost me several evenings, but were totally worth it. 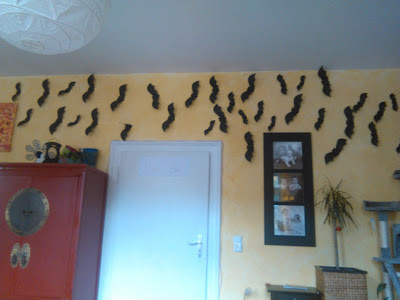 When I found the printable Harry Potter labels  on the Internet, I instantly decided, that I need a devil's workshop. So I collected all kinds of small bottles for a while and tried to make the best of them. The ones that didn't let go of their labels easily, I painted black. 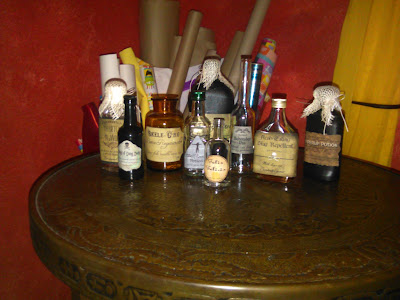 This one is hard to see, because I had to take the picture against the sun. I used heaps if small plastic spiders (the same ones I had on the invitations) and sewed them to my kitchen curtain. I also stuck some on the wall and the window pane, so it would look like they were crawling from all directions (actually only three directions) towards a little cracked hole in the window. The crack I sketched on with a white-out marker. 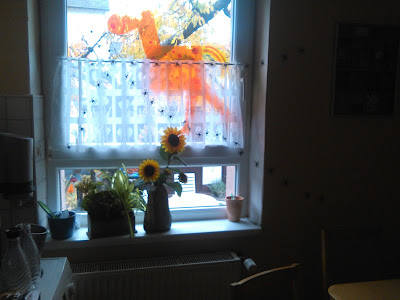 My mother in law had some old white candles that had lost their form a bit over time. I made good use of them, by dribbling on red wax from another old candle around the top and letting it run down. I put them up all over the house, but unfortunately I didn't take a picture of them in place. This picture I took when I created them, to show my friend how creepy they turned out. 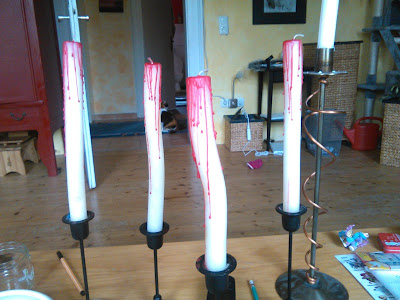 For the Halloween sweets I used mason jars in different sizes. and printed out some Harry Potter sweets labels, which I didn't adhere to the jars, because I wanted to re-use them for something else. Instead I folded the labels like a place card and placed them next to each jar.

The star among these were definitely the eye balls. I personally think they are totally disgusting, they are wobbly and look way to real for my taste. But the kids all love them. We get them for every Birthday, no matter what the motto is.

In the jar on the second photo are jelly beans, ahem, every flavor beans. On the last picture, there are spider-lollipops, created with a lollipop, googly eyes and black pipe cleaners. 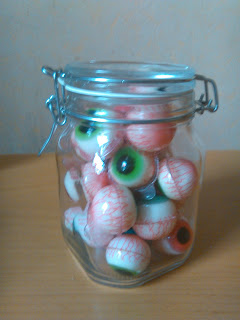 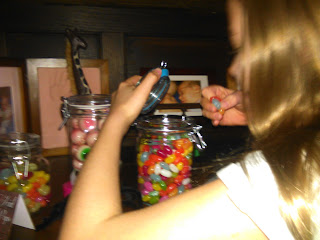 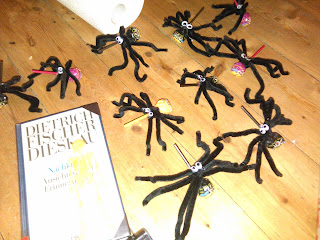 This is one of the soap dispensers I prepared. I removed the label and somehow managed to get the plastic skeleton through the opening. That was a pretty tight fit, and it helped a lot that it was a rubbery, bendy plastic. I prepared a second dispenser with rubbery cockroaches, which creeped me out myself, every time I went into the bathroom. I really regret not having a picture to show you. 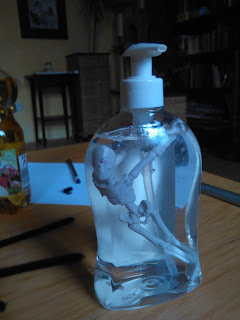 Unfortunately there are some more pictures missing. We hung artificial spider's webs in all kinds of places, especially in the bathroom were the wall is kind of catchy and keeps the webs in place perfectly.
A  white towel with bloody hand marks was hung over the bath tub as if it belonged there. We also hung up a few Halloween lanterns and garlands and used heaps of old jam jar mummy lights to light the place. I didn't want to burn the tall bloody candles, but in the glass jars I decided open fire was safe enough.

Last but not least of my party decorations, I spent weeks (a lot of drying time) creating spell books for the event. I found this idea, like so many, on the internet. I used old hardcover books, glued on plastic toys and some additional details, like the spider's web (hot glue), the corners and stipes (self-adhering magnetic tape, just because it was lying on my desk and had a straight edge) and the die cut letters (fun foam) for the titles.

When all the glue had dried, I covered the books with mod podge and a single layer of paper towel, making sure there were a lot of nice creases and wrinkles, but at the same time as much detail as possible on the plastic toys and letters.

After this was dry, I painted the books with acrylic paints (black and dark brown) and after yet more drying time I brushed on either gold or silver acrylic paint, to enhance all the details.

These are only some of the books I created, again I don't have pictures of all of them.
Later on I created even more books as Christmas gifts for my girls and their Dad. For those I used cheap empty note books and adhered the names instead of grimoire titles. 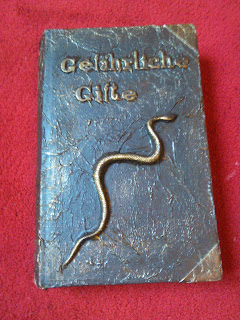 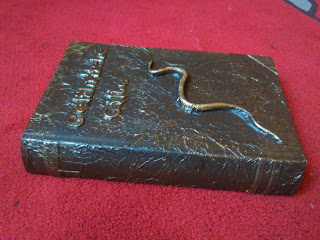 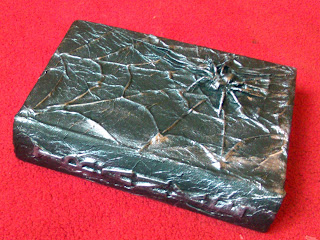 Right from the start I also had the idea to create "the Monster book of Monsters" from Harry Potter, but didn't have a good idea. Until one day inspiration sparked. I decided to cover the largest of my books with fur and glue vampire's teeth to the edges, like in the movie. I found the perfect greyish black werewolf fur in a shop and the perfect yellowed teeth in the super market. Then I wrote the label with a silver pearl maker pen and fixed it to the fur with some brads that look like screws. The teeth I had to trim a bit, so they would fit better on the straight edge and adhered them with hot glue directly to the book. There is a slit in the fur there.

What you can't see in the picture: I used a shortened old belt to tie it shut. We wouldn't want our guests to get bitten, would we? 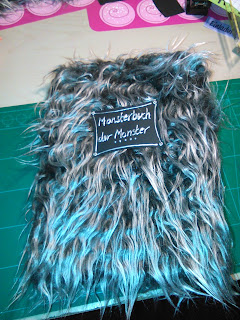 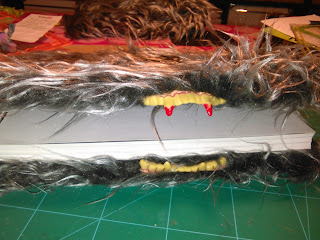 Of course, no party could end without treat bags for the guest to take away. We filled rubber gloves with sweets and  adorned each with a plastic spider ring, that was in one of the deco packs we bought.
As you can see, Nala, the cat, was very interested - she's always were the fun is... 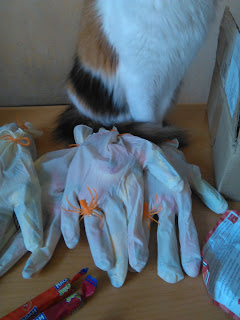 And at the very end: here is it all, nearly packed up. Party in a box for next year. Only 279 days to go. 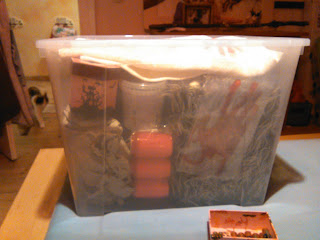