is it believable, time seems to fly right now. It already Challenge time again, over at

This time I personally found our Challenge exceptionally hard, because it's something I hardly ever use:

But I am content with what I achieved, so it was absolutely worth while. Here's what I did: 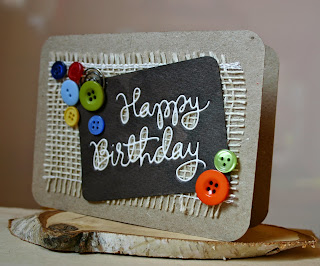 I started out with a selection if buttons, rather randomly chosen, and the feeling of being totally lost with them. Then I opened my box of ribbon and twine and liked nothing much, until this very broad burlap ribbon fell into my hands and I decided to use a piece of it as a panel.

After that I spent quite  a while colouring a succulent, which didn't make it onto the card, because I just couldn't find a way to arrange it with the buttons. At this point I was pretty frustrated, and decided to go with just a sentiment. I cut out the Happy Birthday in white and black and liked neither of them on my card. But then I remembered a Challenge I had seen lately: Use the negative.

So I cut the sentiment again, this time making sure that I arranged the words so that I could use the negative. Then I coloured the piece with a dark brown alcohol marker, to make it show up on the background. But the negative was still not very clear to read, so I decided to piece in the positive and just leave out the insides of the letters.

I rounded the corners of the negative and the card base, arranged it all and glued it down with Matt Medium.

I am pretty happy with my card now, though now I wish I had put the sentiment on foam. But I thought of that way too late.


Hope you'll all take up the Challenge and join in!